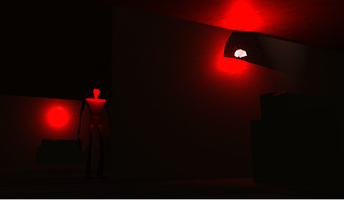 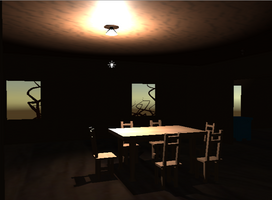 To begin with, the project assigned to us required that we create a 3D ‘walking simulator’. This means that we had to make a game with no interaction mechanics relying solely on environmental storytelling. This means that our player would move through the environment we create and let their surroundings tell the story behind our game.

The project as such required us to create a meaningful environment, complete with 3D modelling, sound, as well as visuals. With all these combined, our story and concept needed to connect with the physical space around it in order to create the right atmosphere and mood for the player.

In turn, our group was inspired by games such as Among the Sleep and Layers of Fear. Upon considering these games we were driven to create a simulator within the horror genre, with a child as the player character being terrorized by a monster within its home. The goal as such here would be to navigate through the child’s dim lit home in an effort to escape the monster.

In the process of game designing, our goal was to make scary atmosphere without using bloodthirsty or grotesque features. The first goal was what mood or tone we would use. We wanted limited place to make the user feel pressured and nervous because the restricted access could be perfect background for horror environment. Thus, we made the background as small two storied house without setting the outside view of house so the user could only play in the house. The next goal was to decide who would be the player. Every game need the main playable character, and we set the child as the main player. The reason why we use child as player is to amplify emotion of loneliness and vulnerability, which are the stimulus of scariness. The third was deciding specific roles per person. As a group, we need united thinking and designing process to build the unified and harmonious outcome. Thus, we split the role and collaborate through the Unity Cloud, saving time for meet ups. In this process, we talked through each other to figure out which part they want. Consequently, we successfully managed given time, each member successfully finished tasks at time and easy to access and communicate project. Next goal was the supplementation of whole project based on the playtesting. We have a lot of playtesting not only in class, but also in private. Every group member participated on playtesting. As in the process of role decision, we split the role and switched role to make everyone know and feel the feedback and playtest other projects in class. Through this process, we only need few times for collecting the playtesting result and spend much time for reviewing and deciding what to improve. The final process was making background story. At first, we did not think about the storyline for this project but after the review time in class, we learned that we need story for this game. However, we faced out time limitation because of some technical issues we have. Thus, we chose adding short video or photos at the end of the game. Originally, we used the simple ending scene, the black window with ‘Game Over’ text. Beside using the original ending scene, we made the short video showing what happened next after the player find the way out. Using short video, we put small part of story in our project. In addition, we accidently found how to limit sound by distance which is very helpful for sound process. It was not on our plan but after testing few sound using this method, we could layer the sound to stress the effect on game play.

Through the stages of our project development we encountered various problems that put constraints on our game:

One problem we faced early on was because of the wall seams in the house which we created. Indeed, the way the house was built meant that some walls overlapped with other parts and thus collided with each other. This led to a strange problem with the lights placed near these walls or from the light coming from outside the house. In fact, the seams distorted the lights and created a glitching effect on some of the walls, or lighted up other walls depending on where the player stood. The actual glitches themselves looked like the walls were shaking and colliding with each other, giving sharp bursts of light even in complete darkness.

Continuing, the amount of lights and their placement also seemed to have a strange effect in various rooms; depending on how many lights you used within a particular room or hallway meant that one or more of the lights would somehow get cancelled out. No matter how much the light’s range or magnitude was altered, the lights would still not function properly. This was quite problematic as our game was already pitch black so the light effects working well were very important. The placement of the lights also sometimes meant that the player would not be able to see the light unless they were facing a particular direction. This particular problem proved to be too puzzling and after much tinkering we were not able to make all of the lights work the way we wanted to. However, the placement of lamp objects near the lights seemed to help them appear, at least somewhat.

A very serious problem we faced was the fact that the monster, placed on the top floor initially, could not travel down the stairs to the next area once the player left the top floor. Instead, the monster would pass through its assigned patrol points (including those placed on the bottom floor) all on the floor that it was placed on. This meant it was passing through walls or repeatedly passing through points very close to each other, making it seem less intimidating. What made this worse was that the Navmesh Agent height (which controls how the monster moves) was set to low, making the monster sink into the ground. As the player moved to the ground floor, they could look up and see the monster’s feet protruding through the ground as it moved. However, this was easily solved by adjusting the height.

Furthermore, our group had an issue with some of the sounds in the game. To start off, we included a background ambient sound which acted as a subtle soundtrack to the game, with the intention of adding more sounds at different trigger points as the game progressed. This was done in the hopes that we could adjust intensity according to where the player was. However, in our earlier iterations, the sounds would not trigger at the right locations and the majority of them would play at the same time as all the other sounds. This created a confusing effect for the player as sound is very important in acting as an indicator of their progress or of close danger. Nevertheless, we managed to find a way to edit these sounds and have them work properly.

Lastly, a concerning problem we encountered was during a few playtests. Indeed, some playtesters failed to identify or notice the monster as they entered its vicinity; they simply would look around the room but would not notice the monster moving towards them. The playtesters would notice the change in sound and would question what is happening while looking around the room, the monster passing out of the room unbeknownst to them. This led to a very anti-climatic effect as the sound change is meant to indicate that something new is happening. However, with the addition of a heavy red glow on the monster, as well as an increase in size, made the monster more easily identifiable. This also helped in navigation for the player as the red glow lights up some of the area as the monster moves.

Throughout this entire assignment we have learned a lot on how to work as a group, to tell a story through a game, and how to combine multiple different elements into one cohesive story. We learned how to effectively work together on a group unity project, timing updates and downloads, making sure we got assets in so others can use them, and how important it is we coordinate what we work on to streamline the overall work progress. How to and not to model and create objects and sceneries and how to import things from maya to unity was another key aspect to what we developed.

Get The Dark Place

Suspense/Thriller walking simulator where you must escape the demon terrorizing your home.